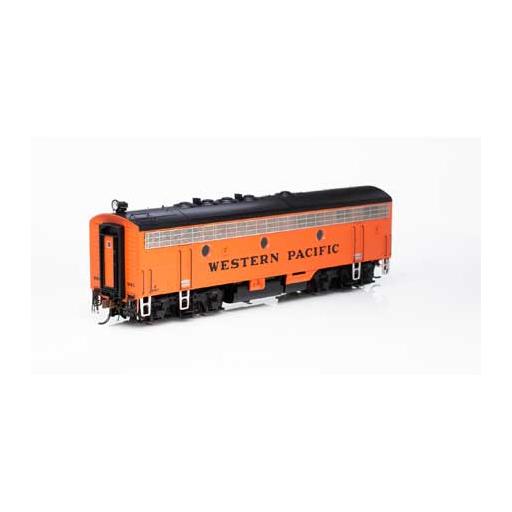 ALL ICG AND GM&O UNITS FEATURE:

Considering the longevity of Western Pacific’s F7 freight units, they changed very little during their careers. However, the changes and modifications that were made, were remarkably consistent unit to unit. That may have something to do with the fact that the WP had only one big diesel shop in Stockton California. The same guys doing the same thing, equals consistency.

The details that make these engines unique: We all are familiar with the steam engine headlight mounted to the rear roof of the b-units, but there is more. All of these units have the WP modified large fuel tanks and partial side skirts. The B-units have a couple of extra roof grabs down by the back-up light.

The A-units have a full compliment of grabs on the engineer’s side of the nose. The 914a and 915d had m/u connectors to the left of the headlight. The 913a, a future member of the Fab Four, has the SP style plow pilot that she still carries today.

Some people may say that these engines are painted in the “Pumpkin 2” scheme. Whatever you would like to call it, we WP guys know that it seems that there were never enough all-orange Fs around to make up a complete lash up. To help with this we will offer one of our A/B sets with and all-orange A-unit (913a) and an orange and silver B (924c).

This page is based on the copyrighted Wikipedia article “EMD F-unit” https://en.wikipedia.org/wiki/EMD_F-unit; it is used under the Creative Commons Attribution-ShareAlike 3.0 Unported License (CC-BY-SA http://en.wikipedia.org/wiki/WP:CCBYSA). You may redistribute it, verbatim or modified, providing that you comply with the terms of the CC-BY-SA.

The Athearn HO F7B, WP/Freight #918c has not yet been reviewed.