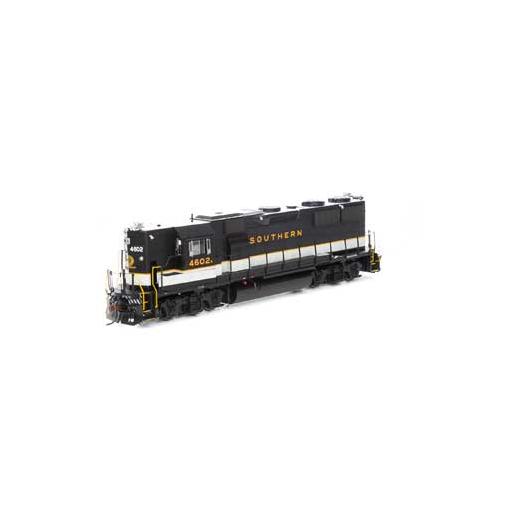 The effort continues to enhance Athearn Genesis models per customer requests and feedback. There has been a lot of activity behind the scenes; we’re excited to include new features often requested, to the GP39X/GP49 and upcoming Genesis models.

Built in November 1980, Southern Railway’s six GP39X locomotives were built during a time a transition for EMD–from the Dash-2 series, to the 50-series. These 2,600hp units, powered by a 12-cylinder 645F3 prime mover, were essentially test beds (hence the “X” in their designation) for future medium-horsepower locomotives that would be part of the forthcoming 50-series. While resembling Phase I GP50s at first glance … “tapered” sidesills, “pointed” anticlimbers, rounded blower housing, and tall radiator intakes … these units had only a pair of 48” “Q-Fans” for radiator cooling, as well as revised clean air compartment and engine compartment layouts, in deference to their shorter 12-cylinder prime mover (vs. the 16-cylinder version used in the GP50).

In 1982, these six units were returned to EMD’s La Grange, Illinois plant for internal mechanical modifications and upgrades, essentially making them “true” GP49s, the medium-horsepower unit EMD cataloged as part of the 50-series. Their horsepower was raised to 2,800hp as a result, and their designation was officially changed to GP49 as well.

As medium-horsepower units, they could be found in a variety of service, from locals to mainline freights. They would continue on in service for Southern Railway’s successor, Norfolk Southern, gaining a coat of “Thoroughbred” black paint in the process, and remaining on their active roster into the early 2000s.