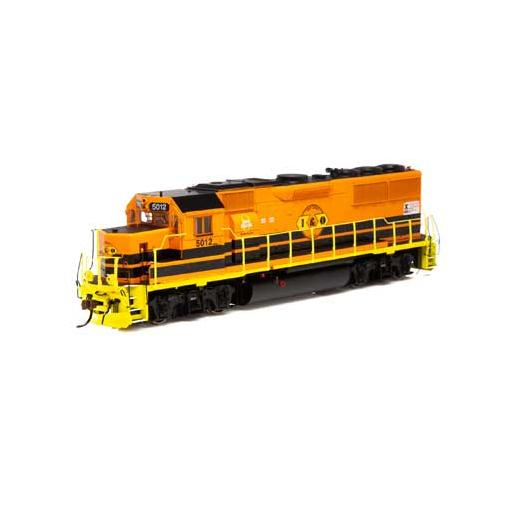 NEW FEATURES FOR ALL GP50S IN THIS ANNOUNCEMENT:

After the UP/MP merger, the numbers of the combined locomotive roster went through many changes. In the mid 1980s, UP initially numbered their ex-MP GP50s in a two-digit series, starting with MP 3507 which was renumbered to UP 57. Only twelve units were ever renumbered to the original UP two-digit numbers. Adjusting their direction almost midway through the process, UP later decided to renumber the entire GP50 fleet to the 960 series. This wasn’t completed until 1992. The 960 series didn’t last long either as the UP again adjusted for the addition of the C&NW GP50s from the 1995 merger.

A total of 278 examples of this locomotive were built. The GP50 retains the same overall length of 59 feet 2 inches as the other GP dash-2 series locomotives built in the same era. It utilized GM’s D87 traction motor enabling it to produce a starting tractive effort of 65,000 pounds, with a continuous rating of 62,400 pounds.

The most significant difference in the GP50 from earlier designs like the GP40 was upgraded components (like a turbocharger silencer and new type of blower housing) and increased horsepower. The locomotive also introduced a new “anti-wheel-slip” technology where the locomotive horsepower output was reduced if a wheel slip condition was introduced. It also included features already common on earlier models such as dynamic braking (a system for temporarily employing traction motors as generators and using the resulting electromotive force to slow the train), and an airtight hood that kept out dust, dirt and other particles from reaching internal components.

All the companies that purchased the GP50 have now been absorbed into other systems. However, a few of their successors continue to operate the units. A number GP50s have rebuilt for better fuel economy and continue in service today.

This page is based on the copyrighted Wikipedia article “EMD GP50” (https://en.wikipedia.org/wiki/EMD_GP50); it is used under the Creative Commons Attribution-ShareAlike 3.0 Unported License (CC-BY-SA). You may redistribute it, verbatim or modified, providing that you comply with the terms of the CC-BY-SA.