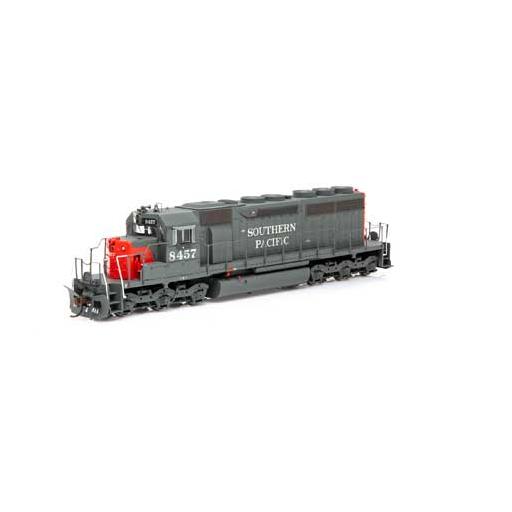 NEW FEATURES FOR ALL SD40s IN THIS ANNOUNCEMENT:

This unit was SP’s unintentional version of UP’s “Desert Victory" paint scheme. That was because most of the gray paint had peeled off the unit leaving the tan primer visible which looked somewhat like camouflage.

The Gulf Mobile & Ohio SD40s were found in a variety of service post delivery from EMD. One of the more consistent assignments would be in coal service on the unit Commonweatlth Edison coal train. Although spending only a few years in service on the GM&O before the company merged with Illinois Central, many of these locomotives lasted in their as delivered livery until the mid 1980s.

CWEX Thrall gons: next months announcements including for the first time, the more common, reporting marks only ComEd scheme.

One of the more famous CSX locomotive was this former C&O SD40. Affectionately referred by many in the railfan community as the CSX “C&O Heritage" unit, it lasted many years in a ratty faded and patched condition. The original C&O paint survived both the Chessie and CSX eras before finally being retired and repainted into her as delivered C&O scheme in 2017. After being restored to her as delivered road number C&O #7534 ex (CSX #4617) was donated to the C&O Historical Society.

This page is based on the copyrighted Wikipedia article “EMD SD40"; it is used under the Creative Commons Attribution-ShareAlike 3.0 Unported License (CC-BY-SA). You may redistribute it, verbatim or modified, providing that you comply with the terms of the CC-BY-SA.