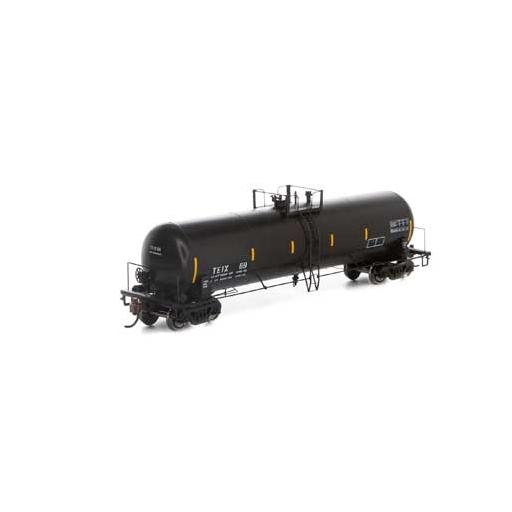 Medium-sized tank cars today are used in a variety of service. These brightly-painted cars carry Anhydrous Hydrogen Flouride, a highly corrosive chemical which is widely used by the petrochemical and polymer industries.

Old World Transportation (OWIX) has a sizeable fleet of these cars, most of which are earmarked to transport Glycol.

In 1979 Transport Canada began to require that all tank cars carrying hazardous goods be marked with a 1’ tall orange band. The orange band was in use until 1988.

This 1974-built car depicts the plain as-built appearance of many tank cars of this era.

These models represent the battered and faded appearance of typical modern-era tank cars. They are still a common sight in all types of mixed trains.

These cars were leased to the Alberta Government and carried the same distinctive logo that was more commonly associated with covered hoppers.

Southern Pacific experimented briefly with Fuel Tender operations in the late 1980s. SP 700, was to be the only one of its kind. See Genesis GP40-2 announcement

Richmond Tank Car was based out of Sheldon, Texas, and began operation in 1962. As a car builder RTC constructed tank cars for multiple railroads and leasing companies.