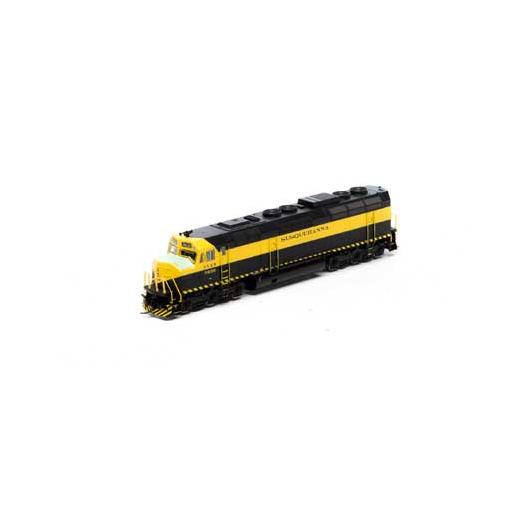 By the early 1960’s the Electro-Motive Division (EMD) was at a big disadvantage. Their 567 engine, in use for over 20 years, had reached it’s peak at 2.500 horsepower in a turbocharged 16-cylinder version. EMD released a new 645 engine in 1966. The most powerful locomotive using this series of engine was the SD45, powered by a 20-cylinder turbocharged 645E engine producing 3600 horsepower. EMD then offered the V20 645E engine in the SDP45 in a standard hood configuration and longer frame to occomodate the steam generator needed for passenger service. The EMD SDP45 was a good passenger locomotive, but to the Santa Fe Railway it did not look the part. EMD therefore designed a lightweight “cowl” body to cover the locomotive, though it did not, as in earlier cab units, provide any structural strength, which remained in the frame. The cowl provided sleeker looks, better aerodynamics at speed, and allowed the crew to enter the engine compartment en route for diagnostics and maintenance. After sponsoring the development of the FP45 passenger locomotive, the Santa Fe requested a similar freight locomotive from Electro-Motive. Where the FP45 was an SDP45 wrapped in a full-width Cowl carbody, the new F45 was essentially an SD45 given the same treatment.

Where the Santa Fe requested a full-width carbody for aesthetics, the Great Northern saw an opportunity to protect crews from the dangers of winter operation in northern climates.