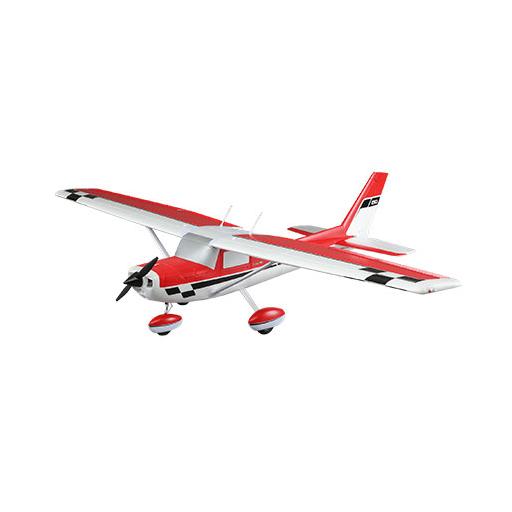 No name in aviation is as well known as Cessna. This fantastic-flying, giant-scale recreation of the Cessna 150 includes features like scale LED lighting, a shock-absorbing nose strut, fully functional flaps, wheel pants, and more.

No name in aviation is as well known as Cessna. This fantastic-flying, giant-scale recreation of the Cessna 150 includes features like scale LED lighting, a shock-absorbing nose strut, fully functional flaps, wheel pants, and more.

Enjoying a giant-scale flying experience is easier than you might think with the Carbon-Z® Cessna 150. This Bind-N-Fly® Basic version includes a brushless power system and comes with the servos and a Spektrum™ AS3X® receiver with optional SAFE® Select technology installed.

Incredible Scale Detail and LED Lights
This stunning reproduction of one of Cessna’s most popular aircraft measures 84-inches from wingtip to wingtip and comes loaded with scale details. These include things like pre-installed LED lighting, a shock-absorbing nose strut, fully functional flaps and wheel pants. Other scale touches include molded panel lines and control surfaces that are corrugated like those on the full-scale version.

Wide Flight Envelope
The inherent stability of the high-wing Cessna design and smooth response of the AS3X receiver will immediately put newer pilots at ease. Experienced pilots will love the wide flight envelope and abundance of power. Slow and scale flight, lazy 8s, knife-edge maneuvers, rolling circles – it can do it all.

Brushless Power System and Functional Flaps
The powerful brushless motor is paired with a 60A ESC that can handle a variety of 4-6S 4000-7000mAh batteries so you can make the flying experience as mild or wild as you want. All this available power, along with the functional flaps, gives the airplane impressive short-field takeoff and landing performance, too.

Fast Field Assembly and Hands-Free Servo Connectors
After initial assembly, you won’t need any tools to attach or remove the wings at the field. You don’t even have to touch the servo leads. The innovative Hands-Free Servo Connection System automatically plugs in the wing servos and LED light connectors whenever you attach the wing.

AS3X Receiver with Optional SAFE Select Technology
The model’s AS3X (Artificial Stabilization – 3-aXis) receiver works behind the scenes to smooth out the effects of wind and turbulence. The result is a sense of stability and precision that makes you feel like you’re flying an expertly tuned aircraft.

Pitch and Bank Angle Limits
These keep the aircraft from rolling or pitching upside down. They also prevent excessive climb or dive angles during takeoff and landing.

Automatic Self-Leveling
Instantly returns the wings to level when the sticks are released.

Optional Float Set and Accessories Available Separately
You have the option of installing floats with a working water rudder so you can fly off water. Installation is easy and can be done in just a few minutes.

The E-flite Carbon-Z Cessna 150 2.1m BNF Basic has not yet been reviewed.