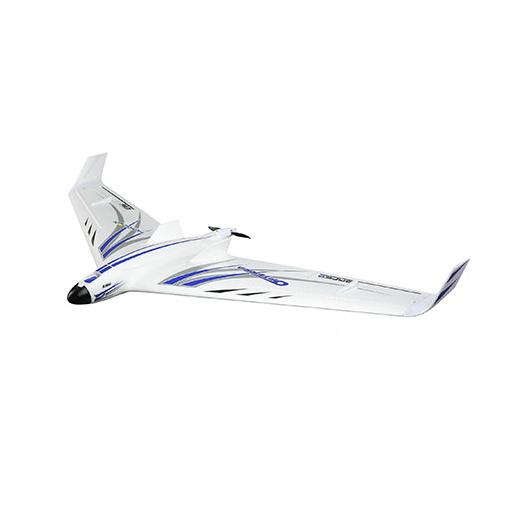 NOTE: A HAM license is required to operate the Video Transmitter in North America

NOTE: A HAM license is required to operate the Video Transmitter in North America

The Opterra™ 2m flying wing is the collaborative effort of George Hicks and Mike McConville – two of model aviation’s premier aircraft designers. Together, they have created some of the best flying RC airplanes in the world. This one is no exception. Its lightweight construction, long wingspan and efficient aerodynamics give it a wide range of capabilities that includes everything from sport aerobatics to soaring. It even gives you the ability to put yourself in the pilot’s seat with FPV gear while using a GoPro Hero 3, Hero 4 or similar class camera to record HD video at the same time.* This Bind-N-Fly® version comes with the added benefit of a Spektrum™ AS3X® receiver that features optional SAFE Select technology. Advanced Aerodynamics and Lightweight Construction
Central to the aircraft’s amazing capabilities are the advanced aerodynamics that shaped its design. In addition to its efficient airfoil, winglets and fins on the fuselage help the model track true in all kinds of air. Vortex generators near the leading edge of the top of the wing, and just ahead of the elevons on the bottom of the wing, enhance slow speed stability and control. The airframe itself is constructed of carbon-reinforced, hollow-core Z-Foam™ material that keeps weight to a minimum while maintaining strength and rigidity.

Easy to Assemble and Transport
One of the model’s most impressive features is how easy it makes it for you to take it with you anywhere. Its plug-in wing panels and winglets are secured with thumbscrews so assembly or disassembly can be done in a matter of minutes. And the box it comes in is designed to function as a carrying case complete with a handle.

AS3X Receiver with Optional SAFE Select Technology
The model’s AS3X (Artificial Stabilization – 3-aXis) receiver works behind the scenes to smooth out the effects of wind and turbulence. The result is a sense of stability and precision that makes you feel like you’re flying an expertly tuned aircraft.

Pitch and Bank Angle Limits
These keep the aircraft from rolling or pitching upside down. They also prevent excessive climb or dive angles during launch and landing.

Automatic Self-Leveling
Instantly returns the wings to level when the sticks are released.

During launch, you can turn SAFE Select technology on to keep the wing level and in the perfect climb attitude until you get both hands back on the controls. If you are flying FPV with a headset, activating SAFE Select technology will allow you to relax and enjoy the view without worrying about trying to stay level or getting disoriented and losing control.

High-Output Brushless Power System with Folding Prop
The high-output power system provides more than enough power for carrying camera payloads or performing sport aerobatics. When you want to power off and grab a thermal, the folding prop reduces drag so you can glide longer.

Up to 3 Camera Mounting Stations Available
In addition to a sleek, low-drag nose for soaring and flying aerobatics, the Opterra wing includes an optional camera nose with up to two forward-facing stations for FPV or HD cameras. There is also a downward-looking camera bay in the belly designed for GoPro Hero 3, Hero 4 and similar HD cameras .

It also has an external mounting station for low-profile Mobius or Legend HD cameras. This allows pilots to mount an HD camera on top of the nose and an FPV camera in the nose.*

*Cameras and FPV gear not included.

The E-flite Opterra 2M Wing BNF Basic has not yet been reviewed.